The major volcanic rocks that make up Dokdo are trachyte and alkali basaltic magma.

The summit of Dongdo rises to 98.6 meters above sea level, and the summit area is relatively flat. There are distributions of soil deposits about 20 to 30 centimeters thick, and it is inhabited by herbaceous plants. However, the seaward slope is mostly formed of sea cliffs about 30 meters in height with steep slopes and little vegetation due to very thin or non-existant soil deposits.

The summit of Seodo reaches an elevation of 168.5 meters above sea level and is composed of narrow, sharp ridges. However, the area to the southwest, which is about 100 to 140 meters above sea level, is somewhat flat, and due to the partial distribution of soil deposits, it is inhabited by herbaceous plants (Daegu Local Ministry of Environment, 2013).
Ulleungdo-Dokdo National Geopark 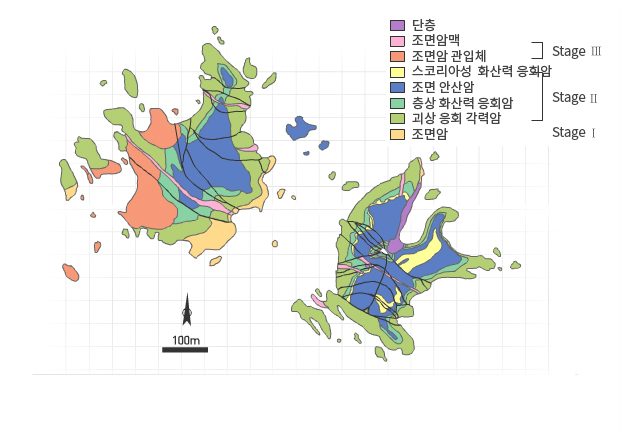 Distribution of base rock on Dokdo 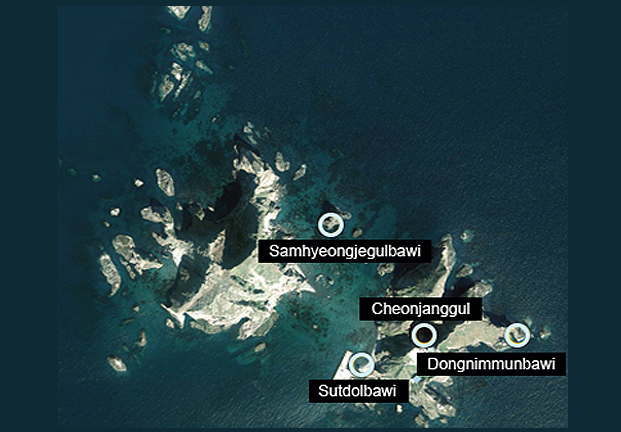 Pursuant to Clause 2 of Article 36 (3) of the Natural Parks Act, the Ministry of Environment designated Ulleungdo and Dokdo as national geological parks on December 27, 2012. The Ulleungdo-Dokdo National Geopark boasts majestic seascapes that are truly unique in the world and topographical and geological features formed through volcanic activity, erosion, and sedimentation.

The Geopark strives to preserve and manage its geological heritage resources, rich in archaeological, ecological, and cultural features, and utilize them as education and tourism resources, thereby contributing to the promotion of leisure and culture for the people of Korea and vitalizing the regional economy. There are a total 23 geological attractions in Ulleungdo-Dokdo National Geopark, among which four—Sutdolbawi, Dongnimmunbawi, Samhyeongjegulbawi, and Cheonjanggul—are located on Dokdo (Ministry of Environment Notice No. 2012-249). The locations of each of the attractions are as shown in < Fig.: Dokdo’s Four Geological Attractions >. 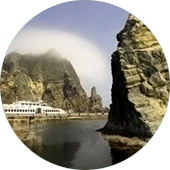 Area of 445 square meters, and 12.6 meters above sea level Tuff breccia, which is vulnerable to erosion, has been worn away, leaving only the harder trachytic dikes.
A unique feature is its horizontal columnal joints. 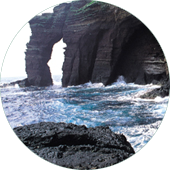 Area of 1,902 square meters, approximately 30 meters above sea level Dikes are composed of tuff, and horizontal bedding and vertical joints are well-developed.
On the facade of the sea cliff, vulnerable rocks along the vertical joints have been worn away and expanded by waves and salty winds, forming sea caves along the base of the joints at the end of the narrow spaces. In particular, as the sea caves on the two sides meet, they form an arch-like rocky topography (sea arch). 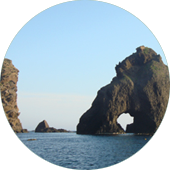 Area of 1,983 square meters, height of 44 meters With the erosion and retreat of base rocks caused by strong sea waves, the rocks have eroded by varying degrees. As a result, a sea stack―a small island― has formed off the coastline.
It rises like a peak, and together with Dongdo and Seodo, the three islands are called “Sambongdo.” 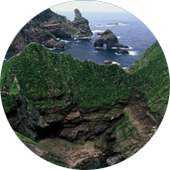 Area of 1,638 square meters, depth of 55 to 75 meters Near the end of the eastern part of the island is a cup-shaped erosional hollow with a depth of 100 meters. Where the seawater flows in and out of the hollow to the sea, two caves have been formed.
The erosional hollow was formed as topography depressed by faulting was subject to winds and erosion. Among the trees on Dokdo, the oldest is the Euonymus japonica (Natural Monument No. 538). Black wood pigeons also inhabit the island.