Dokdo is a volcanic island formed by lava that erupted from about 2,000 meters underwater. It was formed about 2.5 to 4.6 million years ago, between the Tertiary Period and the early and late Pilocene Epoch. (Gyeongsangbukdo, 2010, Dokdo Series).

The parts of the island above sea level are only the peaks of a larger, underwater island. The entire island is a huge volcano, with the highest summit reaching approximately 2,300 meters, which is higher than Jeju’s Mt. Halla, and with an upper diameter of over 10 kilometers (Korea Institute of Ocean Science and Technology [KIOST] Dokdo Research Center). Between Seodo and Dongdo, there is a strait about 110 to 160 meters wide, about 330 meters long, and 5 to 10 meters deep. The waters near Seodo are shallower than those of Dongdo, where the depths of the waters just off the island plummet hundreds of meters (Daegu Local Ministry of Environment, 2013). 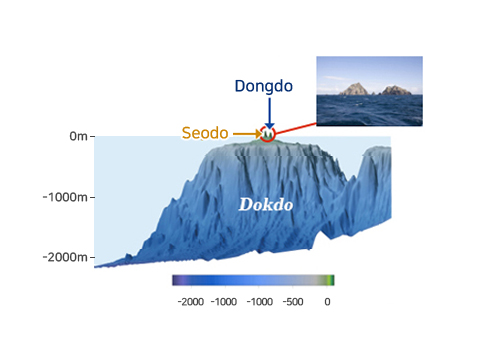 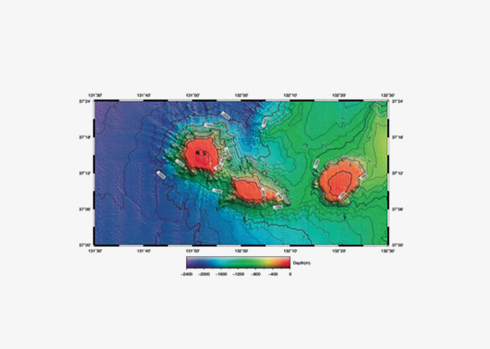 Submarine topography surrounding Dokdo with an isochore line of 13,100 meters