According to studies, Dokdo is home to some 50 to 60 species of flora, which were introduced on the island much earlier than in other volcanic topographies, such as Jejudo or Ulleungdo. As an oceanic island, unlike those in the South and West Sea of Korea, the flora growing on Dokdo holds important significance in terms of geography and botany (Seon Byoung-un et al., 1996).

Most of the flora found on Dokdo are herbs, but there are also five taxonomic groups of woody plants, including Euonymus japonica, Fallopia sachalinensis, Lonicera insularis, Camellia japonica, and Elaeagnus macrophylla. Among the flora growing on Dokdo, plant species such as Cyrtomium falcatum, Sedum oryzifolium Makino, and Aster spathulifolius var. oharai, have maintained their original vegetation. They are taxonomic groups that have adapted to Dokdo’s natural environment and are likely to become symbolic of the island (Gyeongsangbukdo, 2010, Dokdo Series).

In particular, Euonymus japonica, the oldest tree on Dokdo, is a tree species capable of growing and developing on the island. It was designated as Natural Monument No. 538 (October 5, 2012) and holds profound significance in terms of territory and symbolism, having guarded the island for more than 100 years at the far eastern end of the Korean territory (Cultural Heritage Administration, 2012).

Composition of Families on Dokdo 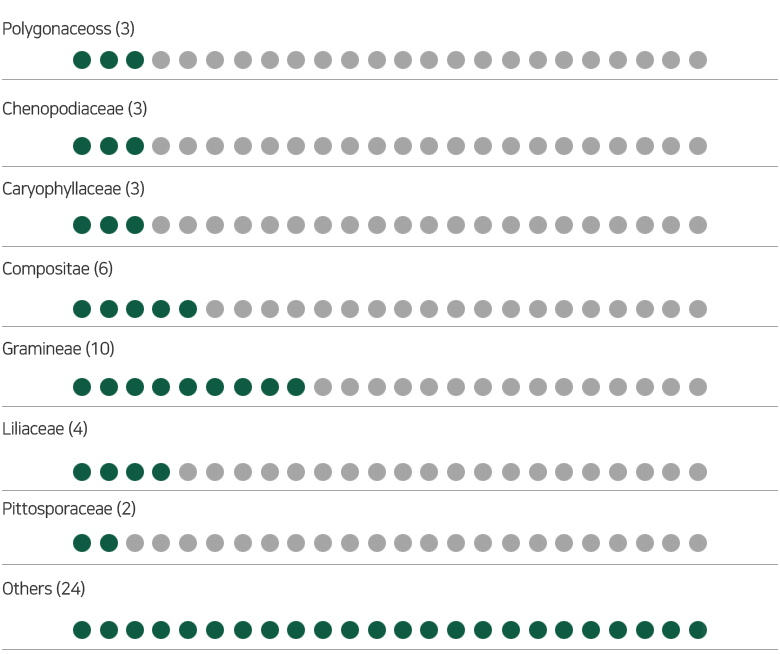