Dokdo, an island of respite for marine and migratory birds

As of 2013, a total of 175 species of birds have been observed on Dokdo. The island is home to large numbers of black-tailed gulls, stormy petrels, and streaked shearwaters. Due to its geographical uniqueness, the island has been nearly untouched by humans, and thereby maintains is natural biota.

For these reasons, Dokdo was designated as Natural Monument No. 336 “Dokdo Marine Bird Breeding Zone” in 1982 by the Cultural Heritage Administration. However, due to its ecological and academic significance, including its unique territorial and marine biota, topography, and geology, the title was changed to “Dokdo Natural Preservation Zone” (December 1999, CHA Notice No. 1999-25).

Dokdo is also inhabited by a wide variety of birds, from endangered species, such as hawks and honey buzzards, to many longbills and the more common sparrow.
In particular, Dokdo is located along the north-south route of many migratory birds, providing much-needed sanctuary on their long journey. Furthermore, it is located in the Pacific Ocean and the Korean East Sea Rim, which is along the route of migratory birds traveling between Korea, Siberia, Alaska, North America, Japan, China, Southeast Asia, and Australia, and therefore possesses significant biological value (Daegu Local Ministry of Environment, 2013).

Proportion of Orders of Birds Seen on Dokdo (2012) 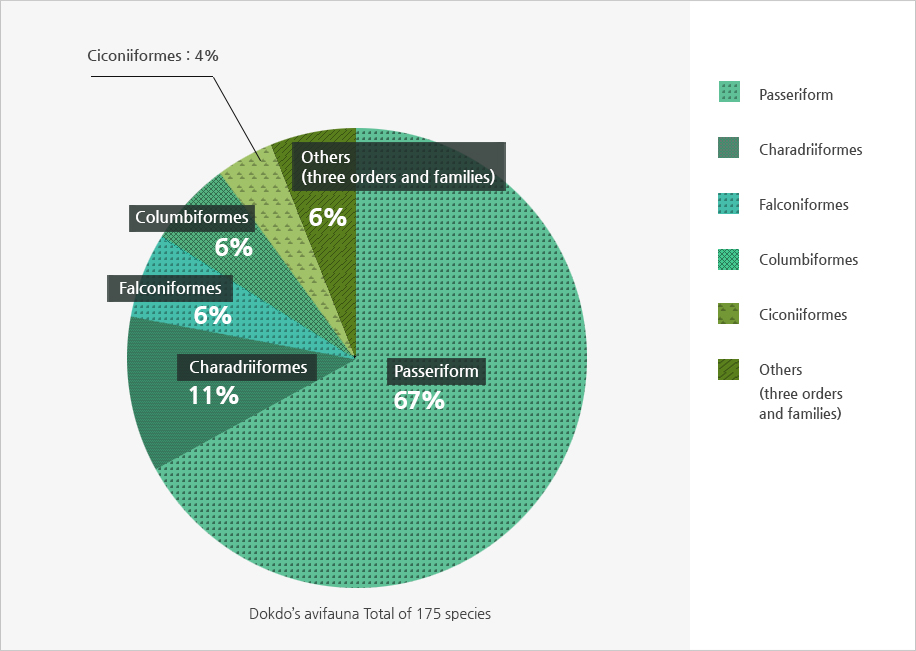