Geographically located a significant distance from the mainland and subject to only limited human activity, Dokdo has a different marine ecosystem from the deep ocean waters of the East Sea.

The waters surrounding Dokdo are where cold and warm currents combine, and due to upwelling caused by the presence of the island, the area is rich in zooplankton and phytoplankton. Consequently, the seas are abundant in anadromous species from the East Sea and sedentary species from Ulleungdo and Dokdo that feed on them. In particular, the island is comprised of rock islets and reefs of various sizes, providing a favorable habitat for marine life, which is responsible for the high marine biodiversity of the area (Gyeongsangbukdo, 2012, Ulleungdo-Dokdo Eco-Tourism Guidebook).

Dokdo’s waters are uncontaminated, allowing it to maintain its natural environment and rich marine resources. This is why Dokdo has such high economic and social value, and why its marine life biota is relatively well preserved in the surrounding waters. As such, it is hoped that future research in this field will uncover valuable information that can be used for the development of technologies designed to restore marine ecosystems damaged by pollution (Gyeongsangbukdo, 2010, Dokdo Series).

Underwater surveys of fishery resources in Dokdo waters were conducted from 2006 to 2010, discovering a total of 95 species, including seaweed, kelp, laver, agar-agar, and fusiforme.

The macrophytes found in Dokdo waters can be categorized into brown, green, and red alage, but the total number of species is said to be in rapid decline. This is presumed to be a result of the rise in sea water temperatures, as in the waters of Ulleungdo, and tropical ocean currents from the south moving north. Another factor could be changes in the marine environment caused by global warming (Gyeongsangbukdo, 2012, Ulleungdo-Dokdo Eco-Tourism Guidebook). 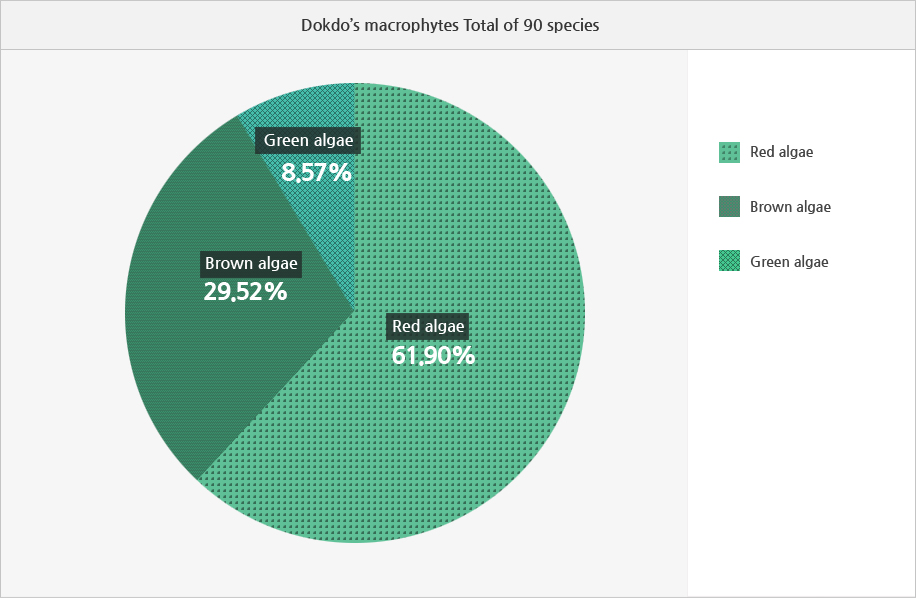 According to underwater surveys of fishery resources in Dodko waters conducted from 2006 to 2010, a total of 190 species of invertebrates were found, mainly consisting of abalone, turban shells, mussels, sea cucumbers, shrimp, red snow crab, and common stalked barnacles.

Benthic organisms inhabiting Dokdo’s old dock, the caves of Dongdo, and the intertidal and subtidal zones near the north and west of Seodo show the highest proportion of mollusks, followed by arthropods, cnidarians, and echinoderms (Gyeongsangbukdo, 2012, Ulleungdo-Dokdo Eco-Tourism Guidebook). 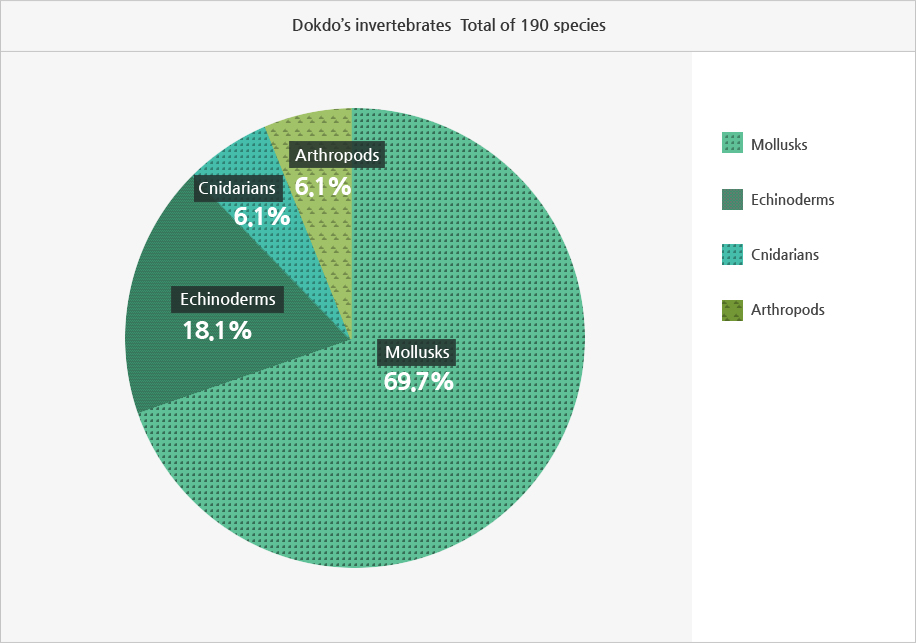 < Sources : Ministry of Oceans and Fisheries >

The fish species inhabiting Dokdo’s waters are not only those found in the East Sea coast, but also include subtropical species that live in the waters of Jeju and cold water species that migrate to Dokdo’s waters (Gyeongsangbukdo, 2012, Ulleungdo-Dokdo Eco-Tourism Guidebook).

< Sources: Ministry of Oceans and Fisheries >